It must be spring! The first Art Walk of the season comes this Friday, April 29, to the charming historic downtown of Cottage Grove. And I’ll be there with my books at The Bookmine from 6 to 8 pm or later. It’s such a great store–a pleasant place to hang out during the Art Walk, or anytime for that matter.

This small Oregon town enjoys the good fortune of having three bookstores within five blocks on Main Street, from The Bookmine at 702 to Kalapuya Books at 637 to Books on Main at 319, and I’m happy to say they all stock my books. They also have a wonderful library a few blocks away (and, yes, my books are there too). A very literary place.

I lived in Cottage Grove for several years before moving to the family farm in Douglas County, and the people of Cottage Grove continue to be supportive. I am most grateful.

The town’s Art Walk happens on the last Friday of the month from April to October. You’ll find food, art, music, a variety of shopping at the local shops, and of course books.

I’ll read a time or two from my new historical novel, The Shifting Winds, and will have that one as well as my first, A Place of Her Own, available for signing. The Shifting Winds is a fictional tale set in a lot of true history. A Place of Her Own is a true story with some creative conjecture. They’re both Oregon Trail stories about strong pioneer women. I’ll be open to informal Q & A as people stop by and to just chatting about the new story and my other work and your own stories.

If you’re in the neighborhood I hope you’ll visit me at The Bookmine.

Gift shops and other general merchandise outlets can be great places to find books and often provide nice displays for local authors, like this one at Roseburg Book and Stationery in Roseburg, Oregon, near my home.

This store on Roseburg’s downtown Jackson Street has been around for over 100 years, and it has generally been more stationery than book, with a wide selection of office supplies, greeting cards, and gift items.

The place is taking on a new shine under new owner Jason Byers, and they’re now proudly displaying the work of local authors and hosting the occasional signing. This is good for the community and good for the authors to have more exposure. It’s not difficult to find me in the display. And they sell.

Thank you, Roseburg Book and Stationery.

I was delighted to greet a lovely bunch of friends at Tsunami Books in Eugene on Sunday afternoon for the book signing and reading there for my new historical novel, The Shifting Winds. Most of my special Willamette Writers group came, as well as neighbors and newfound cousins and other wonderful friends.

This bookstore is a pleasant venue with the warmth of lots of natural wood and funky chairs and books enough to delight any book lover. The reading was well received with a spirited Q & A afterward. It’s exciting for me to see such keen interest in the history surrounding this story of Oregon’s early pioneers and the fur traders w

ho played such a major role in those days.

Along with friendly book talk, we had Elkton wines from the Brandborg Winery with cheese and crackers.

That’s Kris Jensen from my writers group on the right, getting her book signed.

My thanks to Scott Landfield, proprietor, for the space. Thanks to my daughter Carisa Cegavske and another friend from the writers group, Elizabeth King, for helping with refreshments. Thanks to my son-in-law Robin Loznak for taking pictures. And thanks to everyone for coming out on a fine spring afternoon. It was great seeing you all.

We’re headed for Tsunami on Sunday for my Eugene launch of The Shifting Winds. 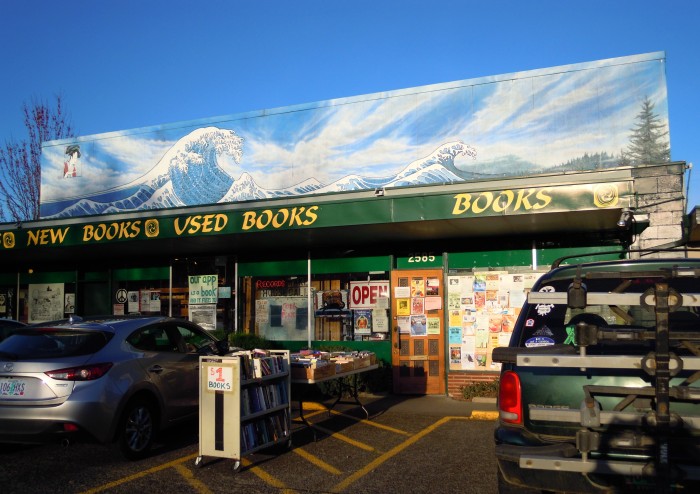 The store’s banner, caught in the late afternoon light, speaks of a storm of waves rushing fast against a vivid sky. And I guess that’s the hope for every book. May it create its own waves, bringing readers into a world of adventure and romance, or wherever the author’s imagination seeks to carry them.

I took this photo last night before my Willamette Writers meeting. The mid-valley chapter holds its regular monthly meetings here. Our speaker at the end of her talk asked the audience why we write, and many answers were offered, but then she told the story of the 1001 nights of Scheherazade and suggested we write so people ask, “What’s next?” That was Scheherazade’s key to saving her own life and the lives of 1001 other virgins in the interim.

I enjoyed a private smile of my own, recalling that after I read a scene from The Shifting Winds at my launch party in Elkton, I opened it up to Q & A. And one of the questions was, “What happens next?” We laughed, but that’s the key, isn’t it? Getting the reader to ask, “What’s next?” That’s what keeps them reading–not just this book, but another and another. And the waves keep coming and keep storytelling alive.

So I’ll be at Tsunami Books at 2585 Willamette Street from 3 to 5 on Sunday afternoon, April 10. I’ll do a reading, probably around 3:30, open it up to Q & A, and sign some books. We’ll have light refreshments, including some Elkton wines from near my home, and have time to chat. The weather forecast looks good, promising some blue sky again, if not as warm as yesterday.

The event is open to the public. If you’re in the neighborhood I hope you’ll come by and enjoy getting caught on the waves of story.

The Books Gallery in Sutherlin offers the most delightful atmosphere for book lovers, and I enjoyed my Saturday afternoon event there surrounded by books with the enticing fragrance of coffee and tea wafting through.

There are of course more temptations from the Lighthouse Center Bakery to go along with your brew of choice.

As mentioned before, they usually have a puzzle in progress. Somebody finished one today while I was chatting with people who came by for a signed book. For the reading we went into the inner room where several ladies had gotten together for painting in watercolors, and they seemed to enjoy a little storytime too.

Altogether, a most pleasant afternoon.

If you’re ever in Sutherlin and want to while away a little time in a friendly bookstore and relish a good snack or work on a puzzle or check out the other activities offered, the Books Gallery is an excellent choice.

Thanks to my daughter Carisa for taking the picture.

TO BUY The Shifting Winds

TO BUY A Place of Her Own

The “Going There” blog series describes Janet’s latest book research trip to Europe. The Table of Contents below shows locations presented in the posts. You can click on each entry to navigate the series.

And the more we dare to try out new paths, like all explorers of new territory, the more we open up further paths that make it possible for us to experience life in ways we never thought possible.
–Riane Eisler, author of The Chalice and the Blade, quoted from Sacred Pleasure